We received this photo from Eugene Settle, who was a boy at the time this picture was taken.

Read his recollections and see a larger photo.

The History of The Salvation Army in Winston-Salem - Some Highlights

1907 - First Disposition of Forces in Winston-Salem, Salvationists working street corners of downtown. From April to September the Salvationists are led by Lieutenant L. Pay, in October he is joined by Captain and Mrs. J. Bloethe.

1923 - The Salvation Army begins working out of a building at 110 Second Street named The Salvation Army Citadel. The building is dedicated March 11,1924 and serves the community for the next 50 years. Other programs are housed in a small community building that was given by Mrs. Carrie Reynolds, located at 2033 Dacian Street.

1935 - A transient lodge to serve those without shelter is opened at 227 North Trade Street. 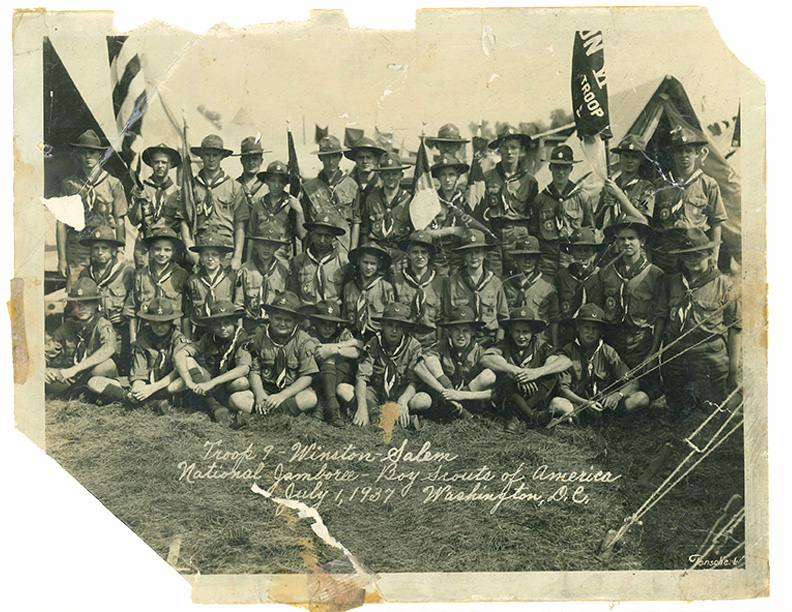 1938 - The Salvation Army’s popular Brigadier Julius M. Satterfield and his wife Augusta begin their 42-year association with the people of Winston-Salem. Before his long career is over, Brigadier Satterfield opens a home for transients in the tobacco market section, organizes a youth summer camp program, establishes the Red Shield Boys Club and is instrumental in starting the Red Shield Girls Club.

1938 - 18 baseball players are enlisted from a team coached by Police Chief Anderson as the first members of the Boys Club. They meet in the basement of the Citadel on a budget of $8 per week.

1954 - Brigadier J. M. Satterfield awarded the Order of the Founder, the highest honor The Salvation Army can bestow

1958 - National Commander Norman Marshall dedicated new Red Shield Girls Club, the first such facility in the Southern Territory. It was on city property leased to the Army “for a token annual payment.”

1971 - Realizing a dream of many years, The Salvation Army moves into its new South Marshall Street headquarters.

1973 - A new Central Corps building is constructed on a lot adjacent to the South Marshall Street headquarters.

1985 - The Salvation Army establishes service units in Davie, Stokes and Yadkin Counties to provide emergency relief. The Salvation Army provides direct services to 23,422 people, virtually equal to the total population of Winston-Salem when the Army first opened 79 years before.

1986 - The Salvation Army publicly announces the beginning of a $2.1 million capital campaign to build a new Corps Community Center and Area Command headquarters.

2000 - A Hispanic outreach program is established under the leadership of Majors Francisco and Carolyn Zuniga, a historic first for The Salvation Army in Winston-Salem

2002 - The Salvation Army hosts an annual meeting with Edsel Ford, chair of the Army’s National Advisory Board. The same year the Army bestows the prestigious Others award to Dr. Ken Carlson and Zanne Baker and the William Booth Award to A. Tab Williams, Jr. It also purchases the former LIFT Academy on New Walkertown Road and relocates the Hispanic Outreach program to this permanent location to become the International Corps.

2003 - Launched a $2.5 million capital campaign under the leadership of Joe Neely and Paul Fulton

2006 - Extended the Summer Music Conservatory into a Year-Round ministry to children and adults and establishes the Kernersville Outpost. There is a also groundbreaking for the new Ken Carlson Buys & Girls Club and Grand Opening of the new Family Store on Peters Creek Parkway this year.

2009 - A Playground is added to the Ken Carlson Center. Later that year, The Salvation Army leases the former Triad Dodge dealership at 680 Peters Creek Parkway to serve as the Christmas Distribution Center and warehouse for the Family Store operation.

2010 - Ground is broken for the expansion of the International Corps.

2011 - June 27, a new multi-purpose building is dedicated at the International Corps, and later that year, a playground is added