Creative Kids Come Up with a Fun Way to Help 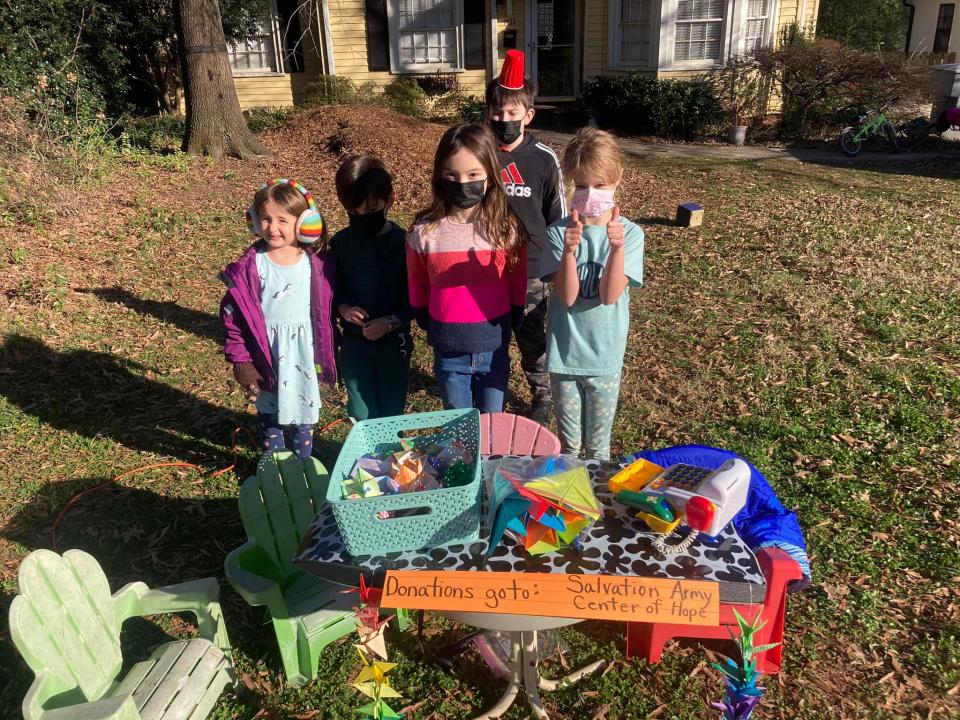 Having a lemonade stand is fun. In fact, Fincher Nelson, 7, and her sister Emory, 4, enjoyed hosting their own last Thanksgiving. But, it just whet their appetite. They wanted to do something else, and they wanted to make a difference in the process by raising money for people in need.

“Our kids are understandably upset by the increase of folks we are seeing who are experiencing homelessness and generally struggling right now,” Amy Hawn Nelson, Fincher’s and Emory’s mom, says. “We have bags we have made to keep in the car and give out to people. They know that the bags are not enough, and are just something little to make life a little easier for that person for a day. People who are struggling with housing instability need a lot of support and this costs money.”

Fincher and Emory wanted to do something more, but what? That’s when a unique idea came to them: they could sell paper airplanes and artwork in their neighborhood. As they discussed the idea with friends, they joined forces with neighbors and good friends Aaron, Aria and Andrew Caudle who brought their origami skills to the table.

Earlier this month, the kids bundled up and laid out their creations on a table in the front yard – brightly colored airplanes, neatly folded paper cranes and artfully decorated “fortune teller” games. Meanwhile, Amy posted on her Facebook page, and the orders came in digitally. Amy accepted donations via Venmo and the kids prepared packages to mail.

By the end, the group had sold enough paper creations to make a nearly $200 donation, and they chose the Salvation Army Center of Hope to benefit.

“I've talked with the kids around the challenges of housing instability, especially for families,” Amy said. “And we talk a lot about helpers, and people who spend their life helping others. They know that the [Salvation Army] Center of Hope is the only shelter in town for women and children.”

They chose to make the gift in honor of Deronda Metz, the director of social services for The Salvation Army of Greater Charlotte. Metz provides leadership for the Center of Hope and The Salvation Army’s homeless services programs in Charlotte. She is respected both here and across the country for her decades of service.

“We thought she would be the perfect person to honor, as when I think of a ‘helper’ and someone who demonstrates true servant leadership, I think of Deronda,” Amy adds.

At The Salvation Army, when we think of “helpers,” we think of families like the Nelson and Caudle families. We think of kids like Fincher, Emory, Aaron, Aria and Andrew.