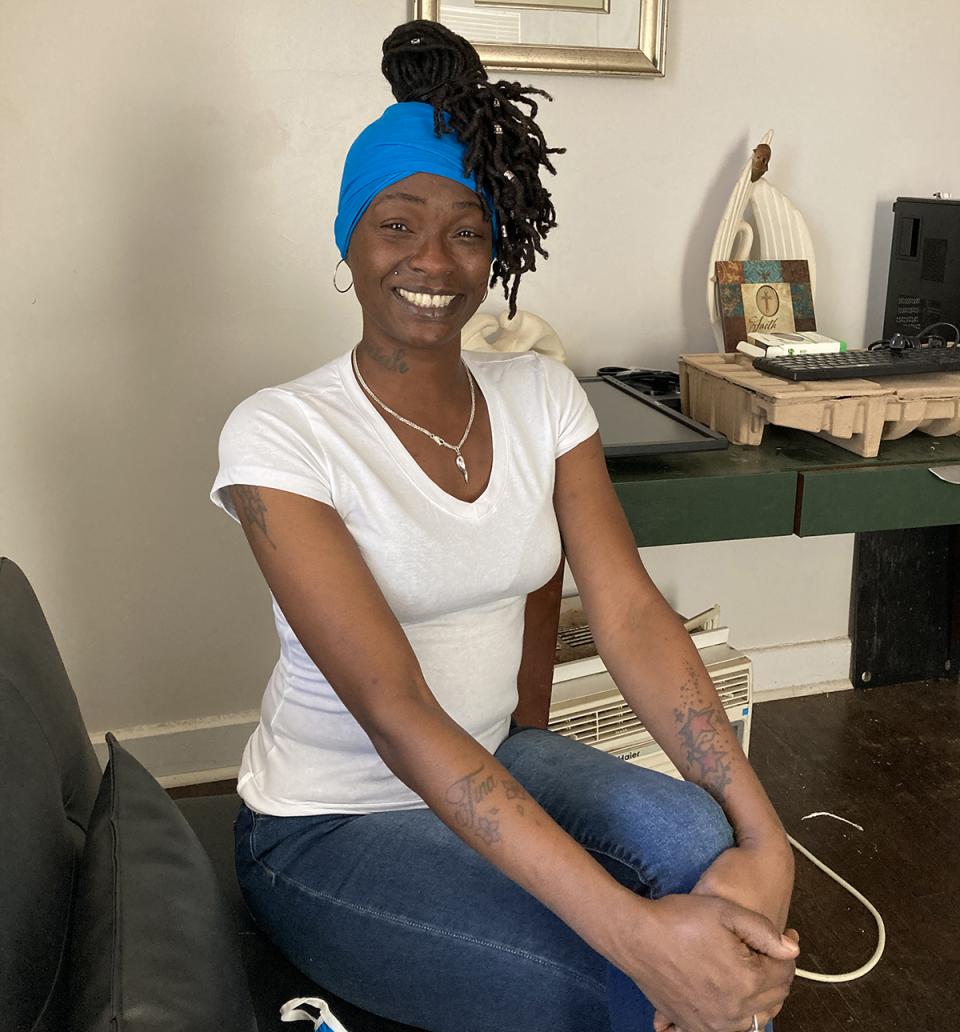 When her mother left her and her brother as children because of drug addiction, Reneé McCarroll, now in her forties, had no idea how that choice would change her life.

When she sat down with The Salvation Army to reflect on how its programs had helped her, Reneé saw it as coming full circle—back to the West Charlotte neighborhood of her youth—and to her own mother, now in recovery for nearly 20 years, who stopped by as she talked.

“I’ve never left Charlotte, been here all my life,” Reneé said. “My grandmother and grandfather had a house probably a minute on the same side. I think it was like God bringing me back to the older people; they still here. It’s been more peaceful.”

When her mother vanished, Reneé’s grandmother, Odessa, stepped in to raise her and her brother. But the abandonment spurred a rage in Reneé that erupted throughout her childhood in fights and violent behavior. Eventually, she dropped out of high school and started selling drugs to support herself. By the time she was 30 years old, she had racked up 22 stints in jail.

Then, her beloved grandmother died, layering her old wounds with fresh grief—and for the first time, she turned to the drugs she sold to numb her pain. She contemplated suicide, but her faith tradition had strong admonitions about such actions.

“I grew up in the church with [my grandmother], so I [believed] if I killed myself, I was going to hell,” she confessed. “So I was literally trying to get the drugs to take me out. And God said, ‘I got another plan for you.’”

That plan had ten fingers and ten toes. An arrest made her aware of her pregnancy—two months along despite her drug use during that time. She had planned to have an abortion when she was released, but the judge sentenced her to another 60 days. At that point, Reneé decided she could not go through with it.

“I knew God was real, but that’s when I knew he was really real.”

Faced withmotherhood, Reneé decided she did not want her child to live as she had been living—“all over, from pillar to post.” At 30 years old, she felt it was time to grow up.

“I didn’t really have anything until Mariah was born. I mean I had clothes, shoes, but I never had any receipts, you feel what I’m saying?” she said. “I never had my own until I decided to be someone’s ‘mama.’ If Mariah wasn’t in my life—and I’m being honest—I don’t know where I’d be. God knows what you need.”

Reneé accepted her newfound responsibilities and began working to provide for herself and her newborn, even taking classes as her daughter grew to earn her GED in 2016. She prides herself on never having called and asked her family for food or diapers.

But when she needed them, her family was there. After a series of setbacks, Reneé lost her housing. Her mother—who had re-entered her life, having been in recovery for years—had just enough room in her crowded home for Mariah. She took in her granddaughter while Reneé slept in her car and looked for something new. She was sleeping in her car and going to work at Family Dollar every day—but she needed help. On the Fourth of July, she went to The Salvation Army’s Center of Hope emergency shelter.

“I said, ‘Let me go on ahead and try to get it together,’” Reneé said. “I got my first promotion while I was at the shelter, so I knew right then and there I can do it.”

Although Reneé did not want Mariah at the shelter, her daughter was growing depressed without her. She relented and allowed Mariah to join her at the Center of Hope.

“It was like God was saying, ‘No, Reneé, you need to take your daughter through the struggles with you and it’s going to be okay.’ We were together and I felt better,” she said. “I didn’t want her there, but I was glad she was with me.”

For six months Reneé worked hard, saved her money, and developed a plan to get back on her feet with The Salvation Army social worker and housing specialist. On December 27, 2019, she and her daughter turned a key to their new apartment through The Salvation Army’s Rapid Rehousing program, which provides minimal monthly rental subsidies to help families sustainhousing.

“From the get-go, she was definitely a go-getter,” said housing stabilization specialist, Benjamin Kimball. “She saw it as her opportunity to make sure she was set up for the future and to provide both for herself and for her daughter,” he said. “She immediately started saving for when the subsidy was going to end. She is super optimistic, super hopeful. Now she’s paying full rent, full everything. She’s become fully self-reliant.”

“All I did was do my part,” Reneé said. “Those people are amazing up there. They helped me to the point where I’m not willing to let them down. I been here a year. It’s peaceful. I am happy. It has never really been a problem, me paying rent; it was always my background in me finding somewhere [to live].” She said she just needed someone to give her a chance.

“It goes to show how easy it is for someone to fall into those circumstances,” Kimball said. “With addiction, it can happen to anybody. It’s not an exclusive club.”

A new lease on life

Signing the apartment lease last year was just the threshold of the new life that Reneé and Mariah now enjoy. The proximity to her mother, Tina, has allowed for her to be a grandmother to Mariah where she was not a mother to Reneé. In fact, Reneé said she could not maintain housing and her rigorous work schedule without her help.

“My mama’s been in recovery [for nearly] 20 years. I’m so proud of her,” she said. “I want her to understand that she doesn’t have to keep doing certain stuff to try to make up … because I know she loves me. I’vebeen on drugs; I know it wasn’t her. It’s the drugs. I know for a fact that I could have been in prison somewhere. I could have been dead. The life that I live now—[going] to work and coming home … I love it. I’m gonna do the best that I can and let God do what I can’t do. That’s it.”

What she can do is focus on mothering her daughter well and teaching her the wisdom that two generations of women had to learn the hard way. She said she may be hard on her daughter, but it is to teach her patience, respect, and responsibility. Only when Mariah earns her high school diploma will Reneé feel like she has accomplished her most important work.

“That girl is so smart,” she said. “We want her to think higher. I say, ‘Listen to your mama, Mariah. You’re not gonna have a perfect life, but you’ll have a good one.’ I love the girl. I’m not willing to give up on my baby.”

For now, Reneé is content to work at Atrium Health’s linen distribution center, making a good wage and earning benefits.

“I’m just trying to do better,” she said. “I don’t want diamonds and pearls; I would love it. But I want to be successful at being a mother. That’s my thing. I’m not going to be here forever and when I leave, I want to be comfortable enough to go ahead and rest and know that Mariah is okay. That’s it. God is amazing,” she said, tears brimming. “I have really been trying to do the right thing since this child has been in my life because she did not ask to come here. All I’ve ever thought about was myself. But the child lives so good, and I’m going to make sure she knows I love her.”