Going Above and Beyond -- It's a Team Effort 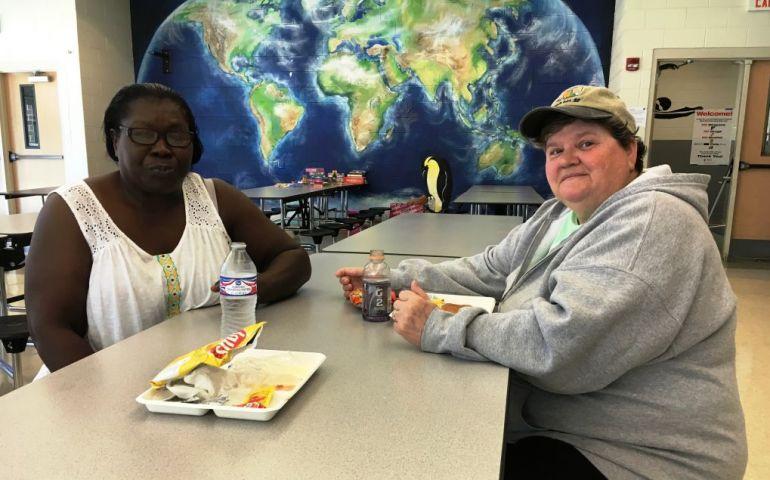 Georgetown, SC - Lunch time at The Salvation Army/Red Cross shelter on Pawleys Island, across the Winyah Bay from Georgetown. It’s one of two feeding sites set up in advance of the oncoming flooding. By Saturday, Pawleys Island could be totally isolated. Here, as at the shelter in Georgetown proper, The Salvation Army is partnering with the Red Cross and hundreds of first responders from around South Carolina, police departments, sheriff’s departments, water rescue teams, and the National Guard.

Helen is a nurse who has sought refuge in the Pawleys Island shelter. Her home is right in the projected major flood area and she’s been in the shelter since Tuesday. “I think it’s going to get real bad”, she says between bites of her hamburger. “I think I could be here for three weeks.” The cooperation among multiple agencies has impressed her. “They’ve done a fantastic job! All of them communicating together.”

Willie Conway lives down the street from the shelter. She is volunteering to help serve meals and her roommate is assisting in preparation. Helen says of The Salvation Army and partners, “120 percent! They’re going above and beyond.” In a bit of a shout out to her roommate, Helen says, “And the food is great!”

Still the worst of the ordeal lies ahead. Emotional and Spiritual Care Officer Captain Alan Sladek from Shelbyville, Indiana; “We fed 16 yesterday, Tomorrow it could be hundreds.”

The Red Cross operates the shelters where The Salvation Army is providing meals and spiritual care. The sites are also housing the first responders who are staffing the over 100 traffic blockades on already flooded roads as the National Guard works around the clock to install Aqua Dams along threatened highways and bridge approaches. Two guardsmen stand watch at The Salvation Army Corps building, providing security for food supplies, sharing bunk space with officers and employees in the chapel.

Working in partnership to serve the needs of those impacted by first the storm, and now the flood.