Salvation Army Serving Communities in the Carolinas After Hurricane Florence 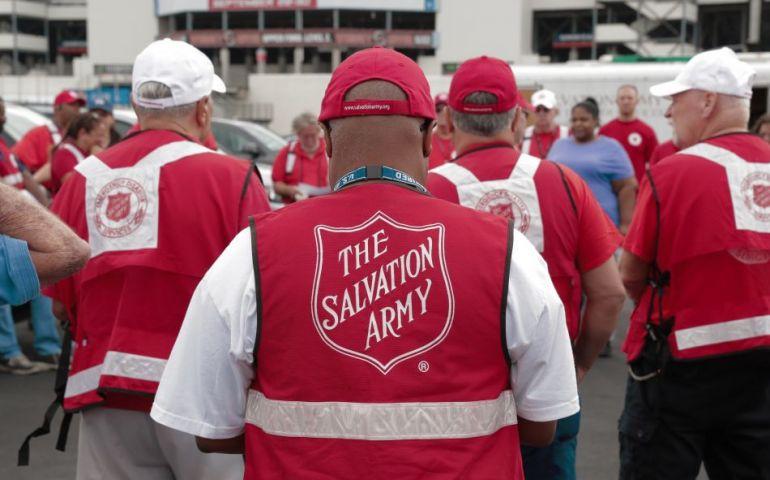 An Army of more than 1,000 Salvation Army officers, employees, and volunteers working to feed, hydrate, and give hope to people impacted by Hurricane Florence

The impacts from Florence continue to unfold across the Carolinas as catastrophic river flooding remains the concern this week into next. Some rivers are expected to remain in major flood stage well into next week. The Salvation Army is on the ground, serving people in communities impacted by Hurricane Florence.

On the ground reports from some of the Salvation Army service areas:

Canteens in service continue to focus on first responder areas; Fire department stations as shifts change and National Guard posts – few small shelter groups. The number of evacuees is minimal at shelters, but this is anticipated to change. Power is available to most all areas and most businesses are open in non-flooded areas. According to news reports (and confirming info from EOC) flooding is expected to increase later this week with the Peede river cresting this Friday and the Waccamaw river following the next Friday. The concern is heightened as this is an unprecedented situation in this region with the Peede and Waccamaw rivers cresting as much as 4ft above record heights set during Hurricane Matthew two years ago. Many people stranded in homes and cars is anticipated. There are many road closures due to flooding, hampering traffic and access to areas of service. This is anticipated to increase as well.

The Salvation Army continues to provide food, hydration , emotional and spirit care to the hurt, hungry and hopeless of the five counties; Columbus, Bladen, Pender, Brunswick and New Hanover. Presently we have 7 Rapid Response Units and 6 canteens handling this mass feeding production. Slowly power is being turned on in Wilmington proper but the outlying regions are continuing to suffer without power and water. At some of our feeding sites we are having to use four wheelers to bring food to a large population of elderly citizens whose road has been totally washed out.

As power is restored in more communities in Hyde and Beaufort Counties, the mobile feeding units are consolidating service at the Chocowinity fire department and Aurora, NC. We will not serve in Belhaven or Scranton. We expect to distribute ice and cases of water as the need arises. We are transferring the USDA food we received last week to the Baptist Kitchen, as they continue to cook meals. Local church groups are insisting in moving that food from the Corps to the kitchen. Neighbors can also pick up meals at the kitchen location at the 2nd Baptist Church in Washington.

The Salvation Army continues to fan out across Carteret County, providing meals, water and emotional and spiritual care for those still feeling the effects of Hurricane Florence. Power is yet to be restored to more than half of the county. The Salvation Army continues to serve at the Newport evacuation shelter at Newport Middle School, and has also fed residents in the towns of Morehead City, Beaufort and Davis. Most residents echo the strength and resiliency of Morehead City resident Amanda Buck: “We’re struggling, but we’re making it. We are just so glad to be alive. We are sticking in there.” Attention is starting to turn to more remote areas of the county, as power starts turning back on the population centers.