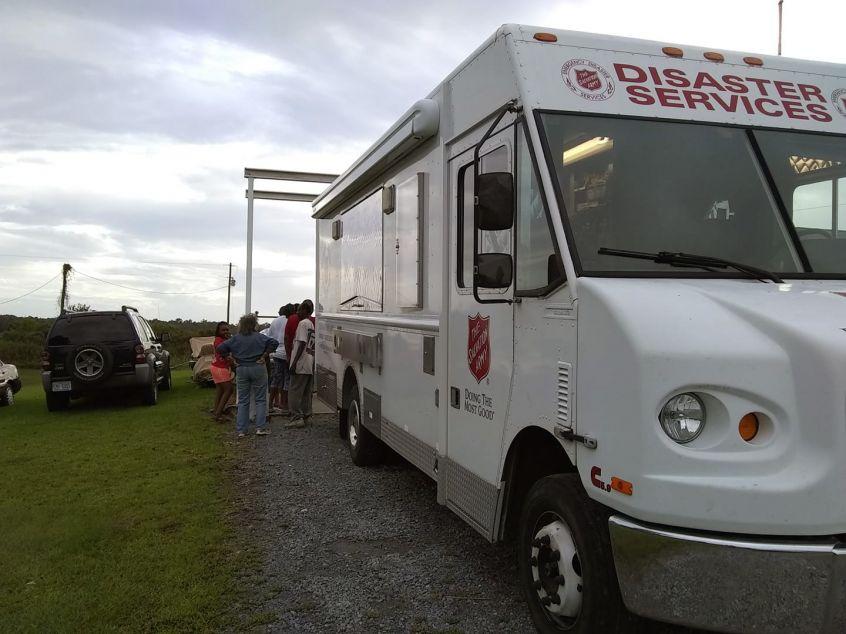 After having lost power for more than 72 hours in Rose Bay, North Carolina, Jessica Bianco had frayed nerves and a refrigerator and freezer full of spoiled food, and then The Salvation Army showed up. “I called a phone number on Sunday to find out where I could get food. It was 5:30 p.m. and they said they would be in Scranton, NC, until 6. I raced over there. I was so appreciative to have a hot meal,” said Bianco.

A single mom of four, Bianco was getting dinner from the mobile feeding unit when the power came back on in her home. The mobile feeding unit, also known as a “canteen,” was from The Salvation Army of Washington, NC, stocked with hot food prepared by the Baptist General Association of Virginia. Also known as the “Baptist Kitchen,” similar units are located throughout the coast supporting mass feeding efforts for Hurricane Florence survivors. Serving on The Salvation Army canteen were Lieutenant Karl Bush and advisory board chairman David McLawhorn and his wife Terri.

Getting the power restored for Bianco took a little longer than expected, due to a toppled pecan tree in her water soaked front yard. “While the power was out I emptied some of the leaking food out of my refrigerator, but I knew that everything would need to come out and go in the trash eventually,” said Bianco. She spent Sunday night cleaning out.

Rose Bay suffered some of the worst flooding in Hyde County, including the main road, highway 264. This was Bianco’s first storm in Hyde County, but remembers the support of organizations like The Salvation Army when Hurricane Irene hit Gull Rock in 2011.

“Times like this we just need everyone to come together,” said Bianco. “I lost all my food and someone gave me $100 and another person offered to cut down the tree. We need each other, and I am so glad The Salvation Army is here.”

When disasters strike, The Salvation Army is there, providing emergency assistance to survivors and first responders. We are serving those in need and, with your support, we can stay on the frontlines of any crisis. A financial contribution is the best way to help after a disaster and The Salvation Army uses 100% of all disaster donations in response to that disaster. Your support makes all the difference!